I've got a stock laser collimator with my Dob. Its construction is based on some primitive China made keychain laser pointer enclosed in the aluminum tube with a side window. It's really frustrating to work with, so I've been looking for alternatives for a while. 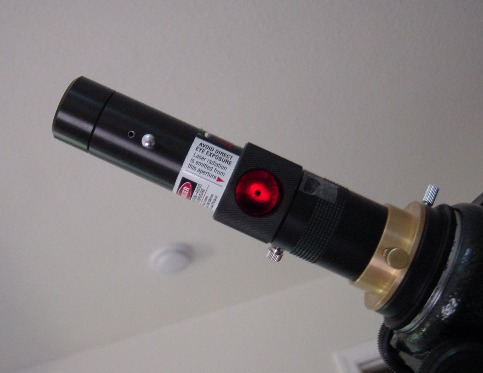 After searching online I've realized that this construction is quite common in cheap accessories from many vendors, the Orion for example.

Long story short, I have finally found the ultimate solution for all of these problems: the Barlowed Laser Collimator (BLC). The physics behind this device, as well as the step by step instruction how to work with the Barlowed collimator is very well described in this article (the image above is taken from that website).

Good to know hints
Overall, I'm very excited with the possibility to collimate comfortably at the mirror's end of the telescope with almost the Star Test accuracy! I would highly recommend this method to everyone.
Posted by Alex at 11:17 AM