Time left before the sunset

This is the old boy scout method of determining the time left until the sunset (or elapsed after the sunrise) "manually". 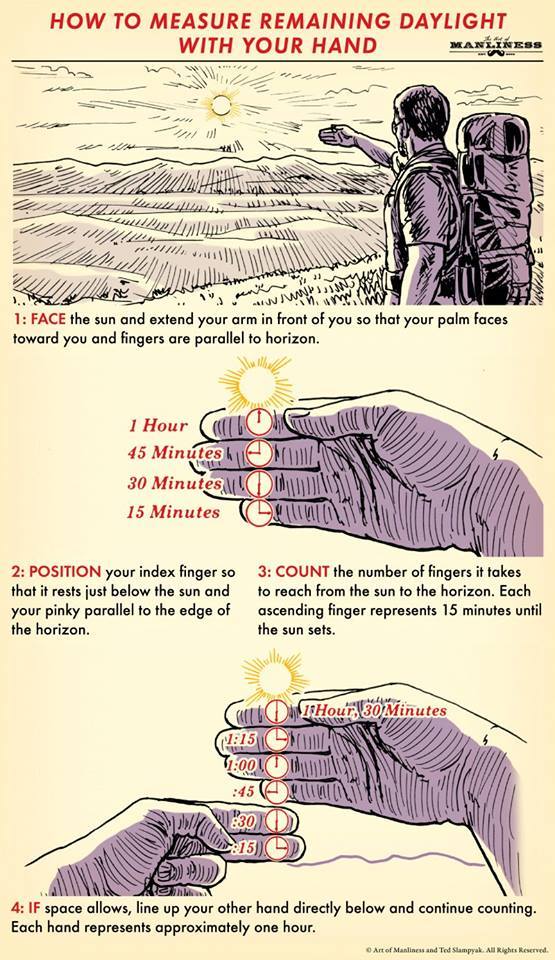 And here is how I have it criticized for my backpacking group folks:

I've been using this method for like 20 years living in Siberia, but it doesn't work well everywhere just like that. The science behind it is the astronomy which is broken here, and here is why:
The Sun moves on its track in the sky with a constant speed of 15 arc-degrees per hour. But that's the arch parallel to the celestial equator (projection of the Earth equator to the sky), not the height of the Sun above the horizon used as pictured above. Thus instead you better be observant about how high the Sun gets and how it moves towards the local horizon during the day (the rule No.1 of any outdoorsman: be observant of your surroundings) and then apply your palm perpendicular to that path instead of parallel to the horizon.

The second issue here is that every person's fingers width and the arm length are different. For example, the distance from my eye to the bent palm like pictured is 65cm (measured with the string held between fingers and stretched all the way to your eye), while the average finger width I have is 2cm (measure four in the middle with the open palm, then divide by 4). Thus the angular size of my finger on the stretched out hand is: arctg(2/65)=1.8 arc-degrees. Thus for me, the Sun is moving along its arch path by one finger per approx. 1.8*(24*60/360)=7 minutes. This is the better edition of the method: know your body features and be observant. But let's get back to the pictured method it's more tricky, and here is why:

If you are measuring the height of the Sun as suggested on the image, you also have your geographic latitude involved in the equation (which might be unknown). The Sun moves slower vertically with the latitude (fi) growing. All the way to the zero at the pole. Near the horizon, the time is growing by the Cosinus law as t = t0/cos(fi). Where t0 is the above per finger time on the equatorial arch. Thus in order to make it moving vertically by 1 finger per 15 minutes (as on the image above), I have to have 15min=7min/cos(fi). Which is equal to fi=arccos(7/15) = 62 degrees, which is a near Anchorage, Alaska latitude! (or in the middle of Siberia as I've been used to). Another drawback is that the method will not work well far from the sunset or sunrise, as that fi angle cannot be approximated by the location's latitude near the noon.

Does it really matter?

The error of the pictured method can be significant. E.g. for the San Francisco (my home hiking region) it will be: t=7min/cos(34deg) = 8 minutes per finger! So if I see the Sun four fingers above the horizon it means the sunset is just 30 min ahead not 1 hour as the pictured method suggests! Such a mistake could mean life and death in a survival situation.

So, adjust that method for yourself and your trip first, or better yet, use the smartphone with some app for the sunset/sunrise, moonset/moonrise times offline forecast leveraging your GPS location data and real astronomy math.