It's not really for astronomy use but the flashlight goes into my travel duffel. A 5 watt LED star can be easily installed into this cheap diving flashlight and powered by 14500 LiPO cells at 7.4 Volt and 2400 mAh. 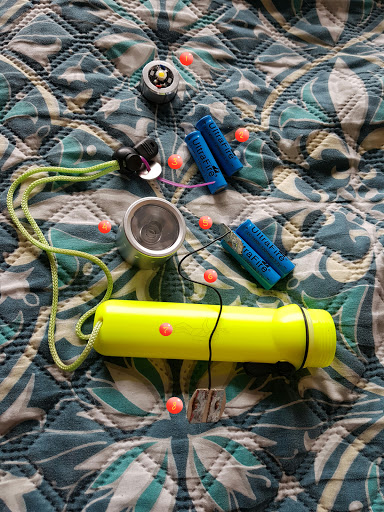 More details under the cut.


The new LED star (5W 6-7V 700mAh) re-soldered in place and gorilla-glued in the original aluminum housing (1). No housing or circuit mod required.
Four 14500 LiPO cells (2) replacing stock AA batteries after the voltage chain modification from 4 in sequence (6V) to 2 in sequence by two in parallel (7.2V), using the DIY adapter (5, 6, 8).
The adapter is made of two PCB blanks linked by thick enough wire (6) to draw 700mA.
The bottom blank (5) has a single contact plate with two solder bumps for better contact with the lower cells' pair negative terminals.
The top blank is two-sided. The bottom has a single plate for positive terminals contact, the top has two for the original LED PCB positive and negative contacts. These contacts are wired to appropriate single side contacts of PCB blanks.
To assemble, put the Wire end (5) into the flashlight housing and lower 14500 cells all negative terminals down. Fit over the top the piece (8) so the positive and negative contact plates are properly aligned, and the connecting wire goes between cells. Put over the LED circuit housing (1) and screw down tight the focuser assembly (4).
That's all.