Just got an idea to try the Bahtinov mask on my Tair 3S telephoto lens on the CN forum. As I had in mind 3D printing of the front camera attachment for the solar filter anyway, I decided to print the mask instead of just an ordinary ring as I usually do in order to get the perfect snug fit. 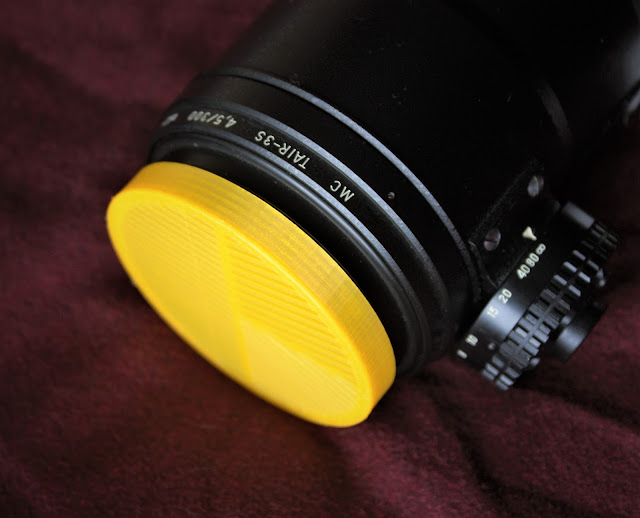 Even though painting it black should improve testing it works very well as is. 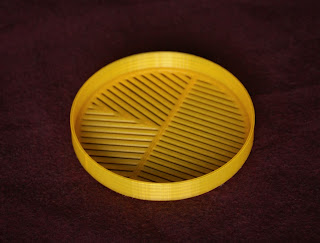 I have designed the mask from scratch in the CAD software giving an arbitrary angle to the slant and width to the slits just looking at some online examples. Some say that the mask is too dense. But it works just fine at least for the imaging application. In fact, narrow slits are adding a new feature - the mask is working as a spectroscope, which allows to detect any CA (chromatic aberration) effects on the focusing. 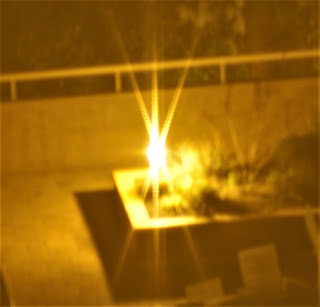 Testing from the balcony on distant lights has revealed that the mask works through the optical viewfinder (with a 2x right angle eyepiece attachment) as well as using the live view mode and 10x zoom on the screen. Later I have tested it with Sirius - screen still works, but the viewfinder - not anymore. Though, my goal is to focus the camera, so I would rather rely on the images series with the mask, as it's much more sensitive compared to direct star "blobs" analysis. On the left is the shot with the lens at "infinity" and the subject light at about 100' distance. The middle beam shift is obvious. 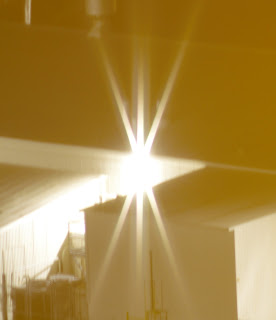 The shot of the light at about 1200' distance. Not so obvious anymore but still quite noticeable. The yellowish tint is from the mask's semi-transparent plastic (it's painted black lately to prevent that, but that wasn't really interfering with the testing). 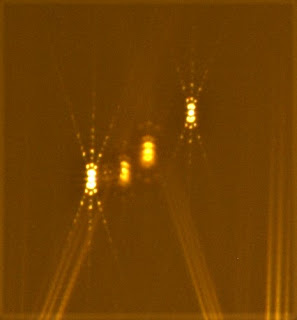 Finally some distant lights around 3 miles away. The central beam is perfectly centered. Note the dotted nature of the rays. That's most likely the sodium light's most prominent spectral line. As these beams are basically the light source specter. 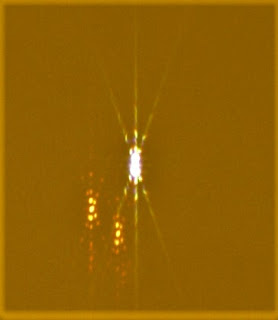 Another set of more distant lights. The white one is at 6 miles, which is already well behind the hyperfocal distance of that lens. Note the specific gas filled lamp's specter (I believe that's a Xenon bulb). The lens is obviously overshooting at its current infinity setting. Correction needed.

Red lights in the background are at around 10 miles distance, however, they are looking like being at 100' according to the middle ray shift! That's in fact the chromatic aberration effect of my lens causing such a notable shift for the red light. Seen that I now have a proof why Solar prominences during eclipse looks blurry in my lens! So I plan making certain adjustments to my focus during upcoming August 2017 totality and capture prominences in focus as well if at all possible. 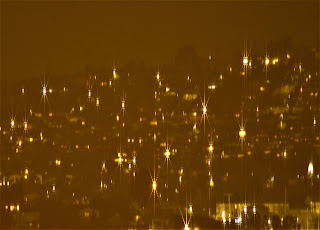 Wide shot with the lights at 0.5-3 miles distance. Click to zoom and study lights of different kinds and colors.

Test 2 with 10+ miles lights and stars 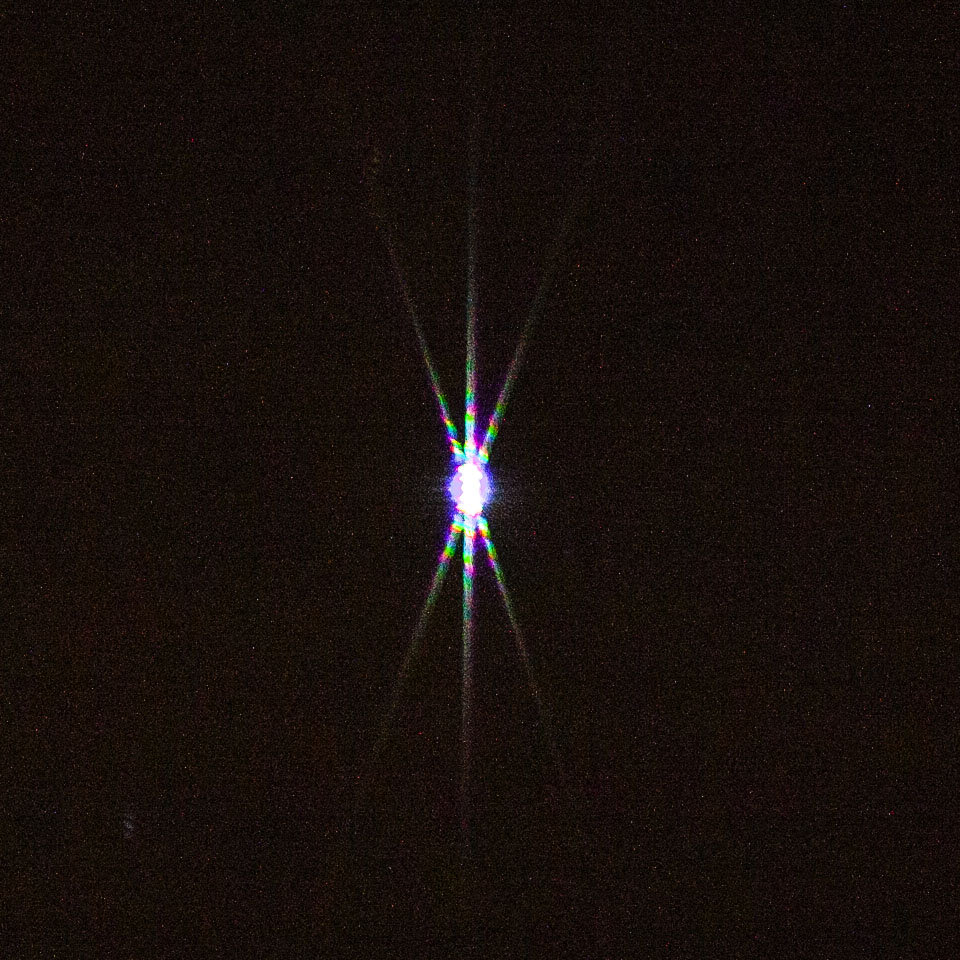 Finally had the sky cleared and tried the mask on stars. High clouds layer was still passing, reducing the visibility, but Sirius was right above the San Francisco lights at 10-12 miles distance for the focusing comparison. The exposure is only 2 seconds, however the sky shift is already there. 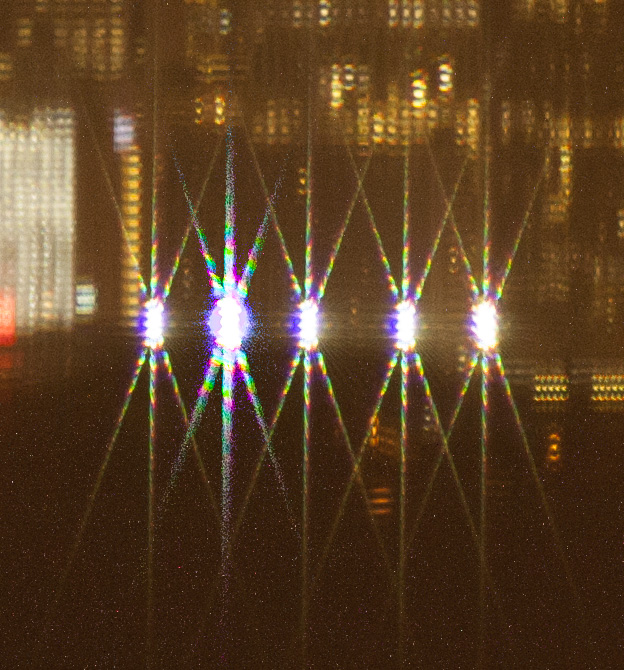 On this shot I have overlapped the Sirius image above with the very similarly looking lights on the Treasure Island ~6 miles away. You can see absolutely no difference in the tiny shift of the middle beam to the left (lights are even better, as there is no sky shift involved). Which means that focusing on a distant light is no different from focusing on the star, at least with my 300mm lens with its 2 miles hyperfocal distance.

I should have the image rotated 180, as the shift is that same overshooting at the infinity focus, but the mask was rotated the next day with straight slits on the other side.. 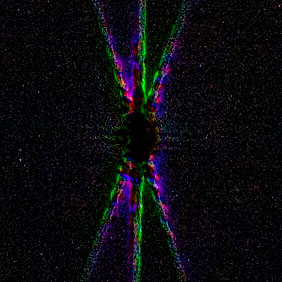 One more test - checking the effect of the glass UV filter addition, which is supposed to change the focal plane slightly. At first, I didn't notice any difference, however, combining two images (with and without the filter) in Photoshop with subtraction algorithm has revealed that the shift is there (note the asymmetry of the black shadow in the middle beam compared to the side beams).

The same technique can be used for the perfect focus analysis, just overlap the image on itself, subtract and see the middle ray shift distance doubled.

The mask is great aid in researching your AP objective lens properties and for its precise focusing. It is possible to use distant lights for all of the tasks as soon as the light's distance exceeds the hyperfocal one of a given lens and particular matrix. Using a white light is most beneficial. However, the image editing software is a must if you want to confirm the ideal focus position without any doubt of the visual perception. 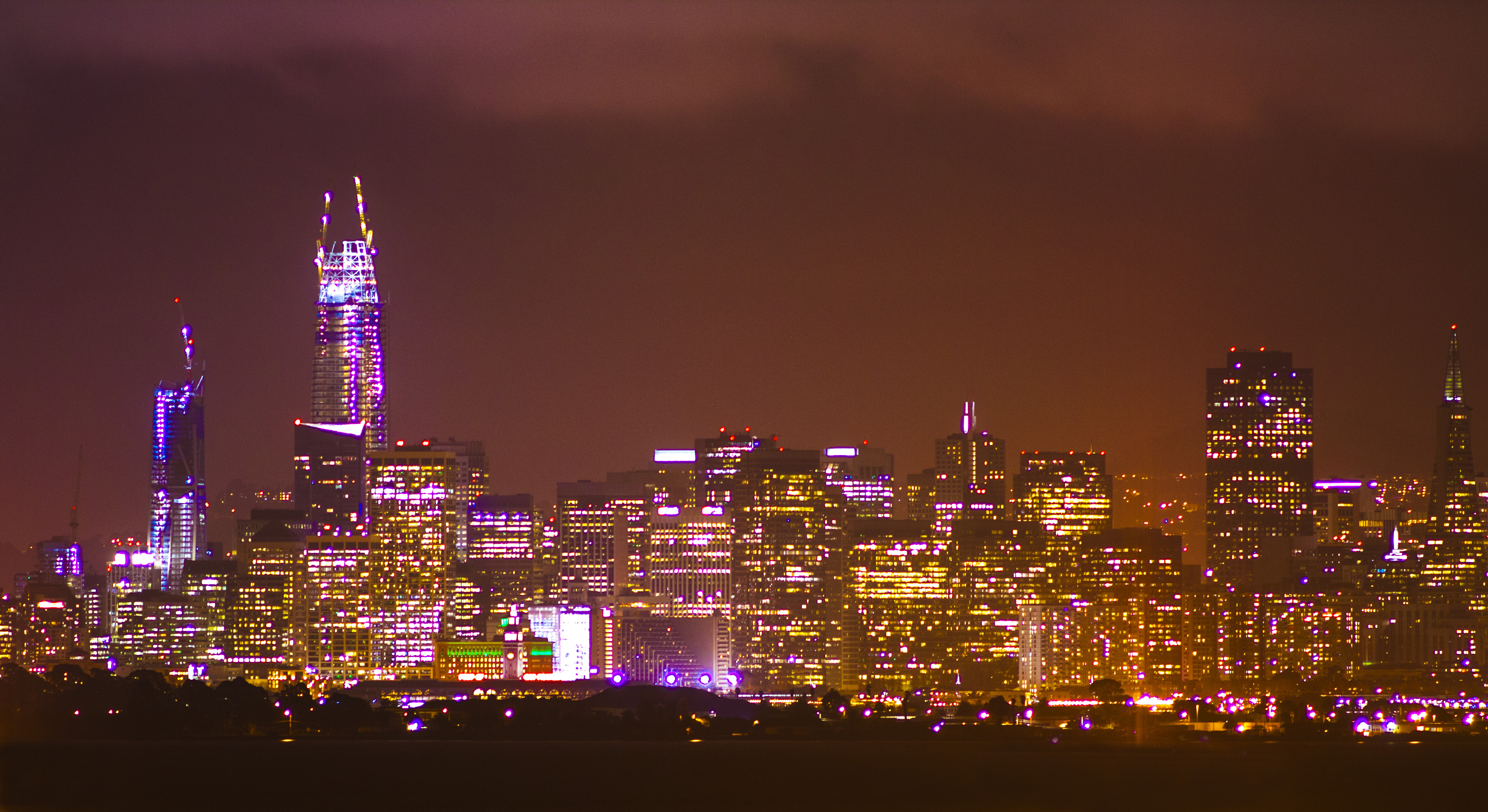 The row of lights overlapped with Sirius above is at the very bottom, slightly left off the center (violet colored). Click to zoom and see the chromatic aberration effect on red lights.
Posted by Alex at 11:32 AM