Another writeup on the subject which is so trivial that it deserves a detailed explanation! How to use the Telrad properly? Many folks using it just as a glorified red dot finder. Which is sad to see knowing its potential rivaling even most advanced GoTo systems... But let's start from afar with the most frequent question a beginner or mature amateur astronomer is constantly concerned about: How to point a telescope to the invisible for naked eyes deep-sky target? I mean, in a reliable way? [the write up is still under development] 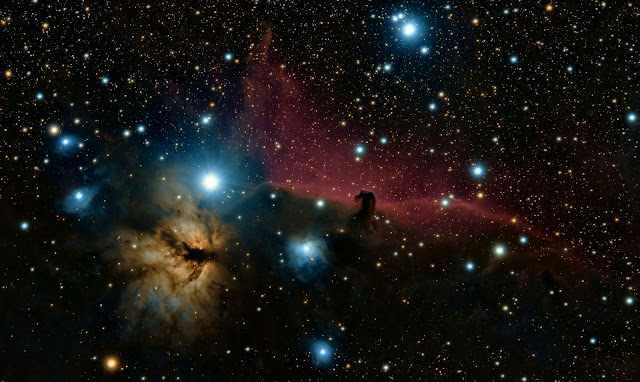 Photo by Guillermo Ferla on Unsplash

I bet you have heard dozens of answers to that already. After asking that question for over 40 years myself and trying what others doing to solve that problem I have finally got the definite answer: the TPM. Which stands for "Telrad Pattern Matching".

Back to our question. What is the formalized goal of all celestial target pointing methods? Surely is to get the object you want to observe into the field of view of your telescope eyepiece (into the magnified and enhanced circular portion of the sky you see when looking into the telescope).

How to make that task so trivial that there is no question of how to do that even for a little kid? Think about the Moon, for example. Obviously, as soon as you can see its shiny disc or sickle in the sky you can raise your hand and point at it with your finger immediately. What could be more trivial than that? That's because the "eyepiece" FOV (the Field Of View) is equal to your eye's, you can clearly see your target, there are no other similar objects in the sky visible, and the "telescope" you are pointing is just a finger on your hand.

But is it at all possible to point a telescope to, let's say, the Horse Head Nebula, which is hard to see even through a decent telescope, with the same ease and triviality? Yes, it is! By using the Telrad Pattern matching (TPM) method. 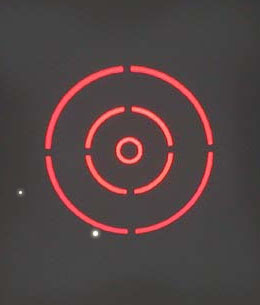 OK. So what's the heck is that TPM after all? Almost exactly the same thing as pointing with your finger! But:

Instead of the easy to recognize Moon limb, you are pointing at multiple naked eye stars near your invisible target. You can call it an Asterism if you wish. But the difference is that it's a dynamic thing. You can add or remove stars (or even bright DSOs) to/from it as needed or desired.

Instead of the finger's contour (which you move in the sky towards the Moon limb), you are pointing with the special reticle "projected" in the sky. The primary difference from the fingertip is that it's much larger and has more features to catch your attention when deciding if you have your finger pointing at the moon already or need to move it a bit more in a certain direction.

As your memory is not yet familiar with your new "finger" and your new "Moon" let's add exact virtual copies of them (the Telrad reticle and the Asterism respectively) on the digital star chart computer screen showing you the live example how these two pieces should look like perfectly aligned in the sky when your telescope is pointing exactly at your desired but yet invisible target and centered in the Telrad reticle ("Moon" on the tip of your "finger") in a guaranteed way. Which is frankly to enhance your brain capacity at the task of precise pointing in an unusual environment.

The TPM could also be conceived as a way of the deep sky target enhancement (target was invisible, now it's clearly visible), pointing finger enhancement (it was small, dark and featureless, now it's large, lit, with many features to align, and even semi-transparent), and the human brain enhancement (with the easy to see and comprehend cheat-sheet right in front of your nose and side by side with the "Moon" and the "finger" clearly visible again) all the way to making our ultimate task as easy as finger-pointing at the Moon now.

Or, thinking in reverse: the TPM is as natural as pointing with your finger at the Moon because in your brain the procedure of finger-pointing at the Moon means moving your stretched out arm until the contour of your index finger is touching the Moon limb's edge at the lowest point. TPM means the exactly same thing in terms of your brain and body work required. Looks complex? But that's just a weird way the "human's finger-pointing process" could be described to an alien. For the typical human brain it's totally natural! Got a tough target to see? Just enhance what you are naturally using for pointing to a certain level and allow the brain to do the work you are perfecting from the time you have opened your eyes for the first time: recognize and match visual patterns around you to survive by  solving problems moving your body accordingly! Weird, yeah. 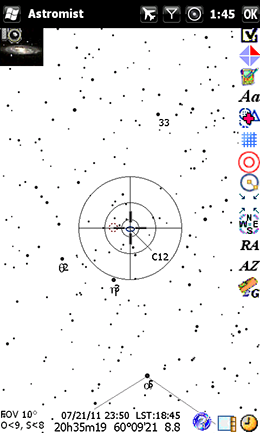 A typical question: Why can't we point a telescope just by a "small finger" like a red dot or a laser beam's end? Because the target is invisible to you, naked-eye stars around it are usually far apart, thus any single dot positioning will be mostly just guessing the invisible object's location between them, not pointing at it. The guesswork is reducing the chance your target will be close to the center of the FOV due to a plethora of natural factors (physiological, psychological, optical,  perceptual, atmospheric, etc) as well as artificial factors (the chart orientation, chart projection, RDF mount angle, RDF aberrations, etc), so if it's not a bright and familiarly shaped object obvious in the FOV you may spend hours hunting for your target around that guessed spot again and again.

Due to the large size and multiple alignment points in the Telrad reticle, instead of guessing you are aligning these points with multiple visible stars and thus automatically triangulating the target's position from most reliable matching points close to each other or aligned with each other in a certain way which helps with the precise matching of views a lot even just from your visual memory. Each parameter your brain is taking into the account automatically while matching these views feature by feature is adding to the accuracy of pointing. And that's not by tedious measurements from multiple points (a well known geometric method of using Telrad or RDF), you are matching the entire pattern unconsciously, with the goal of making it look exactly the same as on the chart's picture. That "the same" is based on zillions of factors catching in your neurons, not just a single dot far away from any visual anchors as with the RDF.

There are some caveats though, which many who heard about the Telrad and even about the TPM method might be overlooking when trying to understand or practice it, so lets polish your understanding of the TPM a little before getting to the actual step by step flow example:

As soon as the pattern is matched, you can be 100% sure your target is in the field of view of your eyepiece. Even if you cannot see it there from the first glance! As many truly serious objects require the field identification which allows you to find the exact spot where the object or its contours sits between faint stars. And for that, you need a really good digital star chart again, which is capable of showing you ALL stars which you could possibly see in your telescope, so you could match it with that eyepiece pattern as well but now with the frame of your (usually) higher magnification observing eyepiece FOV displayed on the star chart instead of Telrad's. Try that with a paper star atlas!

In addition to simple and reliable target pointing benefits, the TPM allows you to focus on the sky more than on pointing aids. For a newbie, it's a great way to learn the sky, so at some point, all you need to point at some faint goodies is the Telrad and a couple of patterns from your good times under the starry sky memories.
Posted by Alex at 2:32 PM