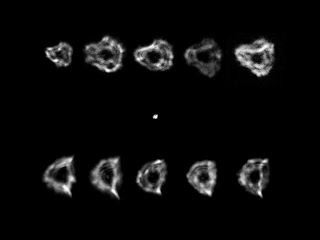 There are several ways to achieve a near to the perfect collimation of the Newtonian telescope. The final phase, which is the proof of perfection is the star test. I had a serious problem with that test, my stars appeared triangular!

This photo-set could be a good example of the typical "pinched optics" problem. Even the atmospheric instability can not hide it. The top row of the composite image depicts my typical hyperfocal stars, the bottom row - prefocal. Star in focus - the dot in the center (still looks triangular).


There are several possibilities that could cause such an effect on the Airy Disk shape. But all of them are related to the mirror cell construction flaws. In my case I found that the features in the hyperfocal and prefocal images are perfectly aligned with mirrors's 3 top clamps. Immediately I've recalled that when I had my mirror remounted in the cell after resurfacing procedures, I decided to use 9 thin Velcro dots underneath instead of original silicone glue blobs. But I've forgot to take into the account the new height of the mirror above the cell. So all of the top clamps tightened to the original mark were apparently overtighten. Just for a tiny bit, but that produced such a dramatic effect on the Airy disk. All I needed to do was to lose the screws a bit and push the rubber pieces upwards making a visible hair wide gap above the surface relieving that pressure.

Collimated and retested right away. The perfect airy disk - no doubt.
Posted by Alex at 12:04 AM