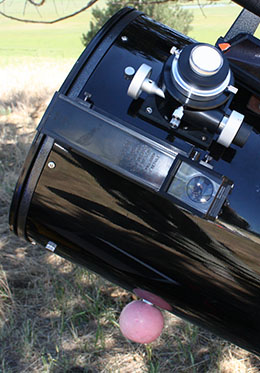 The first modification I've made to my stock Zhumell dob construction was the ball shaped handle underneath the OTA for more comfortable scope pointing and star tracking. The pink high density closed foam bounce ball, which I found in my son's old toys bin, fitted that role just perfectly. Its size feels good in the palm of a hand, and the soft foam material provides especially good feeling in cold temperatures compared to the ice-cold metal of the OTA or other solid handles I used in the past.

After experimenting with different postures behind the eyepiece, I used a convenient location for a brass bolt (3/16") with the wide head and some steel washers for the spacer to install the ball in the convenient place suitable for work behind the eyepiece, as well as on the knees behind the Telrad. There is only one hex nut on the inside of the OTA, so the ball has some freedom of motion around its position as it is being pushed or pulled around. It is also rotating around that axis with some friction. At first, I thought about fixing that with another nut on the outside, but after the thorough field testing decided to keep it rocking free as it is now.

I've realized that such a feature is actually helping me with faint motions of the OTA while star tracking, especially by both axes of the Dob's mount, making slow motions smoother and with less overshooting (compared to moving the OTA by a rigid handle or by its rim). I have mastered the special two fingers grasp of the ball for that which allows extremely fine two axes tracking with that ball.

The way such a mount translating the sideway pushing or pulling into the tangential force is also beneficial when pointing/hopping/guiding near Zenith.